Recently, one of my friends posted a comment on a popular social media site lamenting the impending removal of an orchard of aging Gravenstein apple trees that was adjacent to her property.  Her comment expressed her sadness that the orchard was being removed to make way for “yet another vineyard”.  While I, too, have a sense of loss every time I see a Gravenstein orchard being removed, I do not feel that a vineyard is a bad result.

Both of my parents grew up on ranches in Central California.  My mother’s family ran dairies, all but one of which has been replaced by either a subdivision or a strip mall.  My father’s family ranch just north of Salinas, which has been in his family since 1902, is agricultural and is currently leased to a grower of organic strawberries.  This reprieve is only temporary, however.  When the real estate developer who has an option to buy the property opts to exercise this option, it to will no longer be agricultural land. 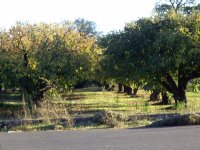 Rather than dwelling on the dwindling acreage of Gravenstein orchards and the decreasing agricultural diversity in California, I, personally, am grateful that there are still economically viable forms of agriculture in our state. 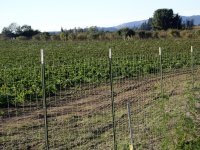 If the land did not have value for farming, the result would be what happened to so much of California in the last 50 years – it would be developed.

So, every morning as I look out over the vistas ahead of me as I am driving to work, I am thankful for the vineyards, the orchards, the organic vegetable farm, and the occasional pumpkin patch.  And I am very glad to live in an area where agriculture is still in “bloom”.