Congratulations to the San Francisco Giants baseball team for winning the 2012 World Series!  It’s a special accomplishment that requires much more than luck. Winning at a team sport depends on a number of factors:  great players, successful execution, and teamwork to make it all come together. 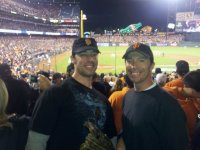 The success of the Giants this year has been widely attributed to concepts like “players feeding off the success of their teammates,” “staying loose as a team,” and “having fun playing together.”  All of these are aspects of what is often called Team Chemistry.

Players will naturally play better when there is a positive clubhouse environment.  They come to respect each other and actually enjoy the company of their teammates.  They will genuinely want others to do well, not only for the success of the team but for the happiness of the individual.  The players’ belief in each other inspires the confidence that they can make that big pitch, or get that clutch hit to win a game.  This kind of attitude is infectious, and can create a “reverse snowball” effect that gains momentum throughout the season and carries everyone up to a higher level.

The 2012 Giants season was a great example of this effect.  Once they found their stride around mid-season, they started playing better and better as the season went along.  By the time they reached the playoffs, they could practically do no wrong.  Even when they were down by two or three games in a series, they never stopped believing they could win it all.

A baseball team is not the only place where a concept like this can work.  Practically any business or company department can benefit from Team Chemistry.  It starts with management creating the right environment, one with a positive attitude and a spirit of camaraderie.  The team needs a common goal or goals, and something to believe in that they can rally around.  This something needs to be more than profit or monetary rewards – they need to believe in the company/department and why it does what it does.

Financial results, like baseball statistics, are just numbers. It is the effort and passion that each person puts into achieving their goals or hitting that winning run that gives a team meaning and the power to win. Ultimately, it takes an inspired team made up of individuals working in the same direction to move from a single victory to a world championship.

How will you lead your team to victory?