Earlier this week, I was traveling the back roads to work when I saw the clouds tucking into the hills.  I tried stopping in the middle of the road to get a picture but wouldn’t you know, just …

When I was a child, one of the things that my favorite uncle shared with me was his love of classic movies. Some years later, when I was in college, I happened upon a class in film appreciation and I have been a dedicated movie buff ever since.

The most significant discovery I made during that long-ago film class was the genre of the silent movie. Prior to that time, my limited awareness of silent movies was due to a television show which featured silent films run at the wrong speed (with silly captions inserted) strictly for comic value.

Sandbags for your business?

Our recent rainfall has given me my first exposure to flood warnings in Napa.  I can honestly say I have never lived in a place where you were invited to go build your own sandbags by city officials. Once I got over my initial confusion about where in the world to put sandbags (do they go by the front door, outside my garage, near the windows?), I had a rather frightening read of the streets that would be impacted in the event of a flood (I think I am in the Phase 4 flood zone), and then I started to think about a business equivalent. I arrived at the airport parking lot to see the dark clouds moving closer. Before I could exit the car the lightening began to strike all around.  Not being a big fan of flying, I felt my anxiety level rise.   I scurried off to the terminal to get out of the downpour.

I quickly forgot about the threatening weather as I moved through the security line, then fumbled to get my shoes on, and looked up to read the monitor one more time in search of the correct gate number. Off I …

So I just spent nine days (actually 7 days and two whole travel days) in Puerto Rico.  I attended a two day accounting conference with the North American division of Alliott Group, the international organization we belong to.  Kathi and I stretched it into a nice beach vacation since we had never been to Puerto Rico.  Puerto Rico is a beautiful island with some of the friendliest people anywhere.

After the conference we spent two days in Old San Juan.  This is quite a city with real Caribbean history.  Here we took a two hour Segway Tour.  For those that don’t …

Of puppies and people

My Scottie dog Ace will be ten years old this summer.  Two years ago I started the process of getting him a puppy for company and to mentor as his eventual successor.  I did this with my late, much beloved Scottie Dandy when Ace came to live with us and it worked very well in a number of ways. 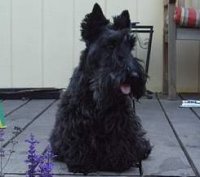 The “puppy”, Blue the Standard Schnauzer, is now twenty months old and a solid 45 pounds.  It has been an interesting journey and … I recently packed  up the SUV and headed to southern California with my family to spend Christmas with my oldest son.  On the morning of Christmas Eve the kids and I headed up the road to the local ski resort.  It was a beautiful day and we couldn’t wait to get onto the snow.  After a few warm-up runs at the lower part of the resort we took a chairlift, to the top of the mountain.

A pattern for quilting and taxes

This is the time of year when most of us are beginning to think about (or are dreading) the process of dealing with our personal income taxes.  In spite of the urge to get it over with as quickly as possible, just as with making a quilt, it is important that you start with a plan and all of the right “materials”.

If you have your return prepared by a tax professional, you may already have a plan available to you.  …

I have just finished relocating my family’s residence to Napa, California. While the move was far shorter than our journey from Atlanta, Georgia five years ago, it still required what seemed like a gargantuan effort and a dedicated team to make it happen. We moved only 60 miles this time but managed the entire project ourselves.

The experience taught me a lot about the attributes of project team members – and the difference in the view of owners versus employees  in a business.

Our moving project involved 5 team members which consisted of two owners (my husband and I) and 3 part-time employees (our unpaid 2 children and one boyfriend.)

Love in the Vineyards My journey resumes in the Napa Valley, more specifically at the top of Spring Mountain above St. Helena.  Yes, that is snow along with some “lovely” graffiti.  Love and romance go perfectly in the Napa Valley.  In this case, the love is being spread throughout the vineyards.  This actually makes sense to me because the real love for wine begins in the vineyards.  So let’s explore further this love affair beneath the vines.

Not often thought of as romantic –  it’s the dirt that makes the difference.  We don’t  …

Our team continues to follow the stay at home order and is working remotely until further notice.

Please monitor our resources page here for the latest information.